How to cross the Andes Mountains: The spine of South America 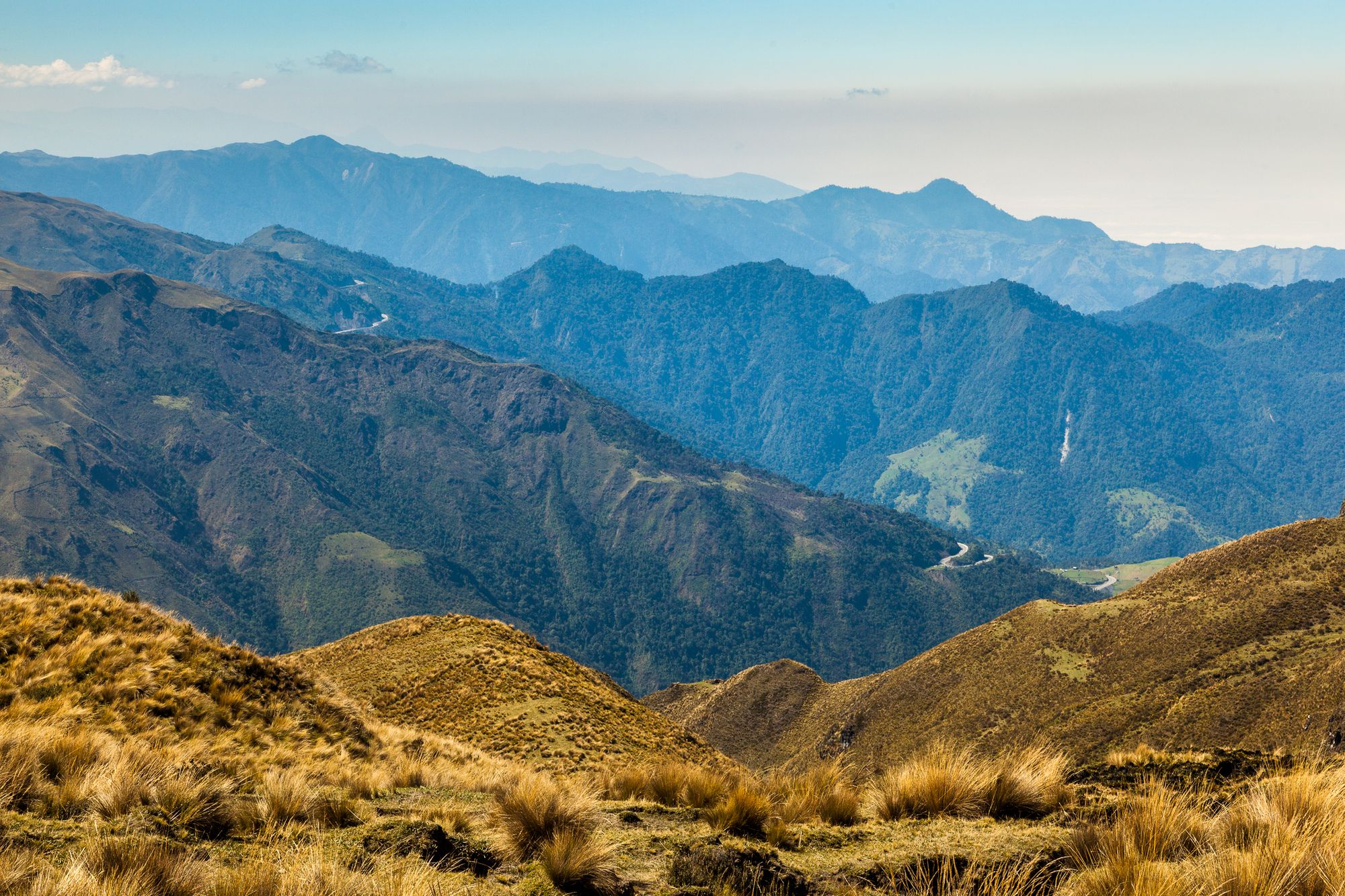 The Andes are the world’s longest continental mountain range, spanning seven South American countries. Rivalling the Himalayas in height – Aconcagua (6,961m) in Argentina is the highest – these snow-capped peaks are the twisted spine that divides one side of the continent from the other.

Contrary to popular belief, the Andes isn’t one mountain range but a series of distinct ranges, also known as cordilleras. Some of these peaks are volcanic, surrounded by otherworldly lava formations and crater lakes. Elsewhere lie high-altitude plateaus, cloud forest and an Alpine tundra habitat that’s unique to the Andes, known as páramo.

“There is no quick and easy way to envisage the Andes. The enormous complexity of this tangle of ranges and plateaux makes the panoramic view impossible,” wrote author George Woodcock back in 1959.

He’s not just referring to the Andes’ complex topography but to the multitude of different cultures that exist within the region. It has been inhabited for millennia by various cultures, ranging from the ancient Incas to the Quechua people of Peru. Learn more about them by visiting their villages and handicraft markets, by exploring the now ruined cities of places such as Machu Picchu.

Where are the Andes Mountains?

In Venezuela, the Andes run parallel to the Caribbean Sea, before turning southwest to enter Colombia. In Colombia, they form three ranges – the Cordilleras Oriental, Central, and Occidental – running from north to south, with deep rift valleys between them.

The Andes branch into three cordilleras as they run through Peru: the Eastern Cordillera; Cordillera Blanca, so-named because of its highest peak, the snow-capped Mount Huascarán (6,713m) and the western Cordillera Negra, which has no glaciated peaks. South of Lima, they branch into two separate ranges as they extend southwards and through Bolivia. Between the two ranges lies the Altiplano, a maze of high plateaus and depressions, where water accumulates in basins to form large lakes, such as Lake Titicaca.

Moving southwards, the Andes trace the border between Argentina and Chile, forming a single, formidably high mountain range. It’s here that you’ll find many of the highest peaks in the Andes, such as Mount Aconcagua, which at 6,959m is the highest mountain in South America. Travelling south, the mountains gradually become smaller; they’ve been crushed and eroded by the vast Patagonian glaciers. In Chile, the Andes slope down to the ocean, where they’re submerged, forming steep-sloped islands.

When should I cross the Andes? What is the best time of Year?

Considering the length and diversity of the Andes Mountains, there is no one answer to this question. If you’re travelling in the far south, to Argentina and Chile, the seasons will be reversed from those in the northern hemisphere. The best time to cross the Andes in these countries is during the summer months of November to March, as this is when the weather is most stable. However, the shoulder seasons of October and April are also a good time to visit – you’ll experience the freshness of spring in the former month and the red-brown colours of autumn in the latter.

Meanwhile, slightly further north in Bolivia, winter (from May to October) is considered the best time to visit. Although temperatures might be lower, this is the country’s dry season – you’ll experience clear skies and good trekking weather. However, you can still trek the Bolivian Andes during the wet season – just be prepared for sudden showers!

Of course, weather in high Andean altitudes is going to be highly changeable, whatever time of the year you choose to visit. We can’t guarantee no rain at all during the dry season, for example. We recommend researching the weather in your specific destination before booking your trip, and packing for all weathers.

A note on altitude

The Andes are the highest mountain range outside of the Himalayas. But the terrain that surrounds them is at an incredibly high altitude too. Settlements have been built at altitudes of over 5,000m – the Bolivian city of La Paz (3,650m) is the highest capital in the world. Over the years, people from the Andes have evolved and adapted to high altitude, where there is less oxygen in the air. They have larger alveoli in their lungs and a higher rate of red blood cells, in order to extract as much of the limited oxygen as possible. You, my friend, have not.

They have larger alveoli in their lungs and a higher rate of red blood cells, in order to extract as much of the limited oxygen as possible.

Altitude sickness – known locally as soroche – is common in the Andes. You’ll feel the effects of the high altitude when you land in cities like La Paz and Cusco (3,399m) – you’ll become breathless when you walk far more quickly than usual. Make sure you spend a day or two acclimatising before you begin hiking. An experienced guide will be able to ensure that you acclimate on the trail, by taking you on hikes at increasingly higher elevations. Staying hydrated and taking your time will also help mitigate the effects of high altitude on the body.

How can you cross the Andes?

Crossing the Andes on horseback is a popular activity, especially in Argentina and Chile. This was the manner in which General San Martin and his army travelled from Argentina to Chile in 1817, in order to liberate Chile from Spanish rule. You can retrace this historic route with a trusty steed, travelling across the pampas, through rivers and up mountain passes. You’ll need to change horses at the Chilean border.

If you plan on a horseback crossing of the Andes, it’s important to have the right guides with you. Not only must they be experts in the terrain, you also need expert horsemen who look after their animals. In Argentina, ‘gaucho’ is the term for skilled horseback rider and cowboy; in Chile, they’re known as ‘hausos’.

There are roads through the Andes. Roads with hairpin bends, which wind steeply upwards through Andes mountain passes. Sometimes they’ll be tarmacked, but you’ll also encounter dirt and gravel roads. If you’re an intrepid cyclist, we highly recommend the challenge of cycling across the Andes. You’ll be able to rack up much greater daily distances than if you horse ride or hike.

So you want to hike the Andes? There are plenty of long distance hiking trails in the Andes Mountains, through a variety of different countries and landscapes. And while the Andes peaks might appear towering and impenetrable, there are plenty of mountain passes for hikers with less experience. Many – like the Piuquenes Pass, also walked by Charles Darwin – have great historical significance.

If you’re going to be crossing the Andes on foot, you’ll need to be an experienced hiker. It’s about more than just being ‘gym fit’ – you’ll need to be both physically and mentally resilient enough to deal with high altitudes, changeable weather, and miles of tricky terrain. If that doesn’t put you off, we’ve listed five of our favourite routes across the Andes mountains below.

The 5 best routes across the Andes

In Colombia, the Andean region is one of the most populated in the country. The three ranges of the Colombian Andes—the Cordillera Occidental, Cordillera Central, and Cordillera Oriental—consist of fertile valleys, plunging canyons, sunbaked plateaus and historic towns. There are plenty of hiking routes through the region, allowing you to immerse yourself in this diverse landscape.

Cross the Cordillera Central through  Los Nevados National Nature Park. It’s an area of high-altitude lagoons and towering volcanoes, snowy peaks and a paramo studded with otherworldly frailejones plants. Wind upwards through these different ecosystems until you’ve ascended the towering summit of Paramillo del Quindio (4,750m). Descend through the cloud forest until you reach the humid Cocora Valley. This is up there with the very best hikes in Colombia.

The Ecuadorian Andes is becoming increasingly popular as a trekking destination, thanks to its dramatic Avenue of Volcanoes, unspoilt páramo, glacial lakes and hot springs. The recently established Quilotoa Loop consists of 200 kilometres of walking tracks and roads in the heart of the Ecuadorian Andes, south of Quito. It’s an entirely customisable route – you can hike or cycle the entire loop, or incorporate a small part of it into your Andes crossing.

We recommend crossing the Andes from east to west, starting off in Cayambe Coca National Park, which will introduce you to three distinct environments – the humid Amazon Basin, temperate cloud forest and the Andean highlands. Wind your way slowly up into the mountains to Chugchilán, a small village in the centre of the Quilotoa Loop. From here you can trek  to Quilotoa Lake, a spectacular water-filled volcanic crater, and onwards to the basecamp of the towering Chimborazo Volcano (6,310m). From here you can drive back to Quito along the western flank of the Andes.

Follow in the footsteps of General San Martin and his army, who crossed the Andes in order to help Chile successfully liberate itself from Spanish rule. Their strategy was to cross the Andes at various points to confuse the Spanish forces, including the Piuquenes Pass. These Sanmartinian routes are currently being considered for a UNESCO designation. Charles Darwin also used the Piuquenes Pass to cross the Andes while on his voyage of South America – and you can too.

Over the past few years, Peru has become known as an epic bikepacking destination. One of its best known bikepacking routes is the Peru Great Divide, an epic 1,600 kilometre trail created by Neil and Harriet Pike. It straddles the Andes, zig-zagging between the Pacific watershed in the west to the Amazon Rainforest and the Atlantic in the east, using the abandoned mining roads crossing the Andes.

If you don’t have a month or more to embark on such a journey, there are plenty of shorter alternatives. Head out of Cusco to the Sacred Valley of the Incas, a fertile agricultural area speckled with the ruins of ancient Incan estates. Overnight in Lamay and ride over a high Andean pass before descending to the Lares hot spring, where you can soak your sore muscles. There’s a campsite next to it where you can stay. And the next day you can head across the watershed from the Pacific to the Atlantic side of the Andes. After you’ve powered up and over the pass, it’s downhill into steamy jungle.

The Cordillera Real (also known as the Cordillera Oriental) is a mountain range in the Bolivian Andes. It extends from north to south, dividing the steamy Amazon Basin in the east from the high-altitude Altiplano in the west, so an Andes crossing will lead you through a wide range of different environments. You’ll hike beneath glacial peaks and high passes, past icy lakes and remote Aymara communities. Despite the breathtaking scenery, the Cordillera Real is one of South America’s best-kept trekking secrets.

The best known Cordillera Real treks don’t necessarily take you from one side of the Andes to another. The Cordillera Real Traverse, for example, takes you from north to south along the most glaciated stretch of the range, passing under the glaciers of several 6000m-high peaks. But that doesn’t mean you can’t cross the Cordillera Real from one side to the other. We’d recommend starting out on the western side, as it’s where the capital, La Paz, is located. Considering the city is situated at an altitude of 3,600m, we recommend spending a night or two there to acclimatise.

Find awesome listings near you!